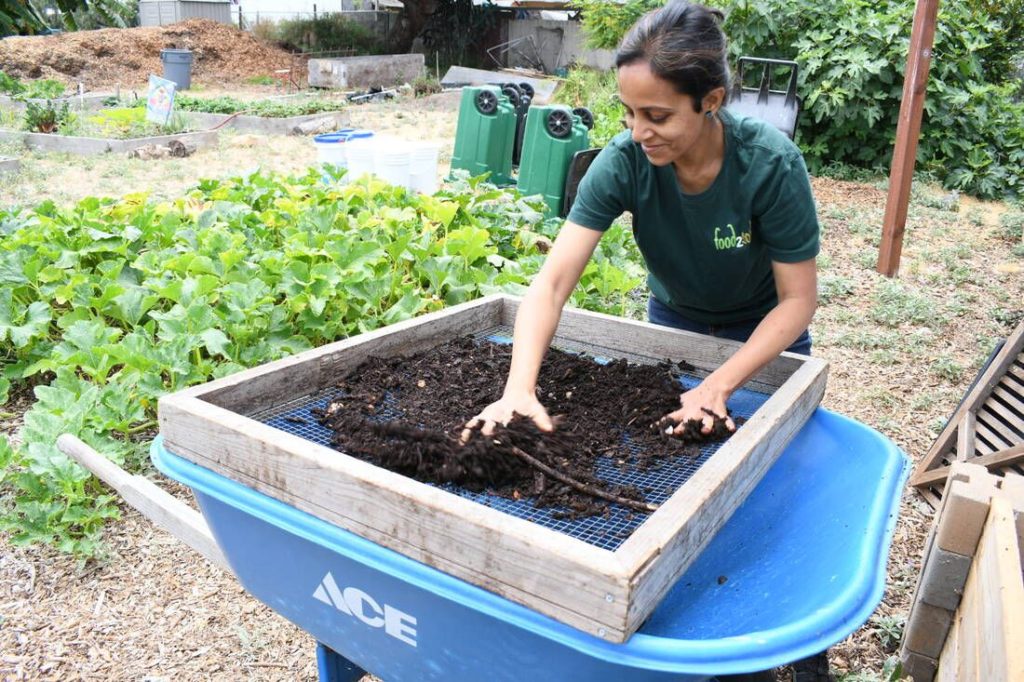 Community composting comes with a host of challenges, most notably, the collection of food scraps. San Diego, Chula Vista, Encinitas, and Vista are the only cities in the county that allow community scale composting, but local jurisdictions each have their own regulations with regard to the collection of “solid waste”, which includes food scraps. Most cities in the County of San Diego have an exclusive franchise agreement with waste haulers, preventing any other entity to pick up and move waste, including food scraps for composting.

“The journey so far has been riddled with heartache. It hasn’t been easy at all. For the first several years we were a policy loophole. We knew we were doing the right thing but we didn’t know if we were legal,” explained Sarah Boltwala-Mesina, executive director of Inika Small Earth, who launched Food2Soil the day after Thanksgiving in 2015, when she picked up her first ten buckets of kitchen scraps from Ironside Fish & Oyster in Little Italy and took them to Juniper Front Community Garden for composting. “We tend to not look at the roadblocks in our way and instead focus on finding detours around these roadblocks to find lasting solutions.”

Chefs, farmers, businesses, and individuals who participate in the Food2Soil program share the belief that waste is a resource that has intrinsic social, environmental and economic value. Members of the Soil Farmer program self-haul their food scraps to a Soil Farmer who earns an income by processing the scraps into compost. “I’m really proud of what we’ve accomplished here,” Boltwala-Mesina said. “With every bucket we pick up we want to develop the capacity to process close by.”

Community composting has only recently gained widespread interest, and around the US, it’s largely been a hauling solution that provides a different channel for the food scraps to be transported, but does nothing to facilitate the processing of those scraps. Food2Soil has realized that scaling is conditioned on the convenience of the drop off hub. “We are very careful about how we expand our network,” she said. “We have enough examples out there to show that odors and pests are really not issues at drop-off sites, so they can be at cafes or anywhere that property owners are willing to allow us to place a locked cart.”

Despite the incredible potential for waste reduction, community composters in the State of California are still considered outlaws due to franchise agreements cities have in place with large waste haulers. Even in instances where haulers don’t offer composting services for food waste, many city officials will not allow the Soil2Farmer program to operate. “I think everyone’s waiting to see what happens in 2021,” said Boltwala-Mesina. “Many cities are renegotiating their exclusive franchise agreements with their haulers this year, and CalRecycle has provided a model franchise agreement tool. The language in the Model Franchise Agreement and Model Mandatory Organic Waste Reduction Ordinance includes community scale composting activities, thus allowing jurisdictions a lot of flexibility to make provisions for these activities.”

Elimination of policy roadblocks would allow Food2Soil and other community scale composters in the state and across the nation to focus on public education, composting best practices, and soil regeneration, instead of politics. “Food2Soil aims to be the Airbnb of community composting—a network so expansive that anyone can find a place to drop off their food scraps and Soil Farmers can earn an income accepting food scraps and building compost,” Boltwala-Mesina explained. “We envision a network where every zip code has a drop-off location, and compost is built where food is consumed.”

Boltwala-Mesina believes that the more expansive the network, the more opportunities there are for educational experiences. Thanks to the decentralized nature of the Food2Soil collective, local collection and processing of food scraps facilitates community interaction, knowledge sharing, and knowledge discovery and the program thrives on the creativity and autonomy of the Soil Farmers. “Our relationship with waste reveals  underlying class issues with waste. There is this idea that someone else needs to do the dirty work for us,” she said. “Drop-offs allow people to take ownership of their waste. And a significant number of people want to participate in the solution.”

Sarah Boltwala-Mesina is the Executive Director at Inika Small Earth, a San Diego based nonprofit operating neighborhood composting programs. Sarah started small in 2015, picking up kitchen scraps from Ironside Fish & Oyster after Thanksgiving, later growing to serve large restruants and over 150 households across the county.