As long as there has been injustice in the food system, there has also been resistance.

For centuries, resistance has taken the form of spirituals, protest poetry, civil disobedience, restaurant sit-ins, worker-led strikes, boycotts, and taking to the streets. In redlined neighborhoods, tribal communities, and immigrant enclaves across the United States, the acts of growing and sharing food have been ongoing forms of resistance, demonstrating self reliance, sovereignty, mutual aid, and survival. Writing, remembering, gathering, skill-sharing, and organizing are all forms of resistance that continue to challenge injustices in the food system every day.

In the last few decades, more voices have emerged, each calling for actions to reshape the food system in a positive way. Many have advanced their messages to the mainstream: buy local, grow organic, support farm-to-table, vote with your fork. Built on solidarity, these popular movements are often lauded as another form of resistance to the unjust food system. And while they may provide respite from some of its impacts, the question is, respite for whom?

Ironically, the leaders and members of popular food movements are largely those who have historically had the most wealth, representation, and power in the food system—White people. The solutions that have been put forth, as a result, tend to revolve around using this group’s consumer power to create markets for food they deem as healthy, sustainable, or ethical.

Creating escapes from the industrial food system—for those who can afford to participate—will not address its larger issues of deepening injustice, accelerating climate change, or inhibiting resilience. In fact, to borrow words from Beatriz Beckford, longtime organizer for the National Black Food and Justice Alliance, “It is critical that anyone engaged in the food movement—or any movement for that matter—have a racial justice analysis and further, a racial justice practice. Any movement devoid of that practice is not a movement at all.”

As the nation confronts the pandemic, climate crisis, increasing economic inequality, and entrenched racism, many are realizing that fixing our systems requires deeper reflection and a profound examination of power.

Research on food system narratives and messaging conducted by the Rockefeller Foundation for their Reset the Table report shows that across the general public, the concept of “food systems” is generally well understood. There is significant consensus that current policies prioritize big food and agriculture companies’ profits over people and the environment. Most view systemic solutions as important, and nearly 70% of the population surveyed showed signs of readiness to take action for transforming the food system, with increased exposure to messaging increasing their likelihood to engage on the subject. Most importantly, the research concluded that there is a “sense of hope that change within the food system is possible, despite the fact that people see the system as big and complex.”

A number of major companies, publishers, and media outlets have, too, begun to use their influence to bring food system stories from the fringes to the mainstream, following smaller entities that have led the way for decades. Social media and the Internet have also allowed disenfranchised groups—small business owners, people of color—to rise to prominence in food media and reach millions. Long-held worldviews, myths, stereotypes, and values are constantly being challenged.

This momentum for engaging in conversations about food systems and power is promising, but it is only the first step. Cultivating a movement that continues to build this understanding, strengthens a common vision across diverse sectors, unflinchingly addresses issues of race and class, empowers those most impacted, and unifies the abundant, yet fragmented efforts that have brought us to this critical inflection point, requires extensive social, economic, political, and tactical organization—not to mention significant funding and deep relationship-building.

By cultivating relationships across the food system and outside of it, we can capture this moment to advance the food movement beyond its historically limited outcomes. We can amplify more stories, create a coherent strategy, and position movement actors in a way that enables them to be part of governance processes beyond simple policy advocacy. A new norm is possible.

We live in an era defined by crisis, but also great promise. Climate change, economic inequality, and racial injustice threaten our food system and our future. Yet, in the face of these challenges, there is a vibrant, visible resurgence of movements, of communities rising up against entrenched economic and political power, to pursue a common vision: a food system that belongs to all of us. 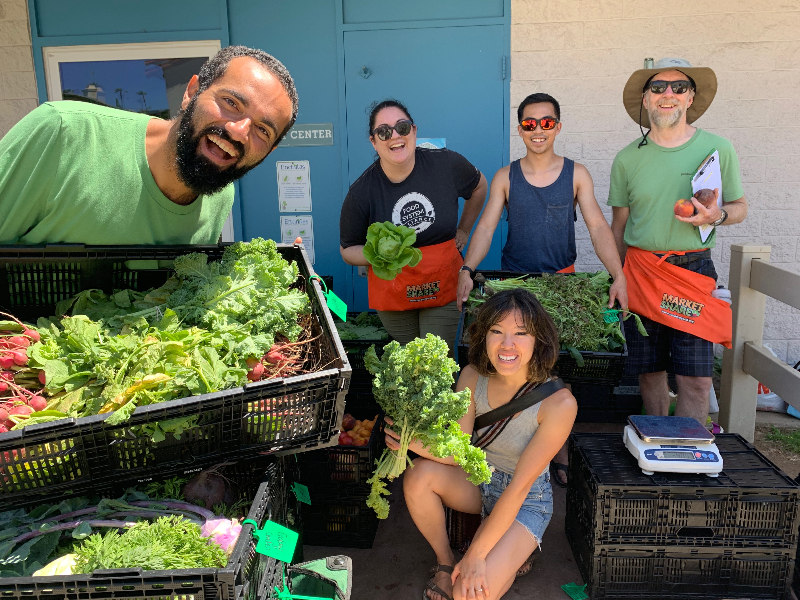 Build a Movement that Uplifts a Local, Sustainable, and Equitable Food System

There is a profound disconnect between people and food.

Most individuals rarely reflect on their relationship with food, and their experience with food generally revolves around convenience, either shopping at the supermarket, dining out at a restaurant, or eating a meal on the go.

The distance between people and food has grown significantly in response to increasing national and global consolidation within the food system.

In our food system, the dominant narrative is created and reinforced by those in positions of power, which are primarily large, multinational corporations.

They have the power and resources to influence narratives that are spread through mainstream marketing channels and media. They also influence policy decisions and the allocation of resources. These narratives however, rarely reflect the voices and stories of those most impacted by inequities, family farmers, fishermen, farmworkers, food workers, small food business owners, and residents of low income communities and communities of color.

Changing public perceptions and narratives in support of a local, sustainable, and equitable food system requires contending with the dominant narrative.

The dominant narrative about our food system reinforces the idea that bigger is better, and that large-scale, highly mechanized food production is the only way we can feed the world.

There are many food movements.

Effective movements that truly engage people in thinking critically about, advocating for, and creating beneficial systemic change are built from the ground up, not the top down.

Transforming our relationship with food

Strategies at a Glance

Read the Next Objective