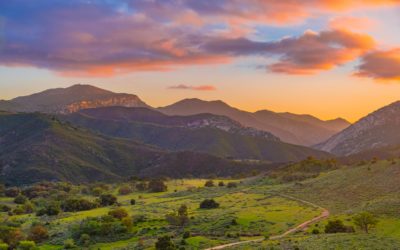 On the drive to Pauma Valley, it’s wise to slow down on Cole Grade Road. Not just because there are two hairpin turns as the road drops eight percent, but because a perfect, panoramic view appears for only an instant at the top of the first bend: blue sky,... 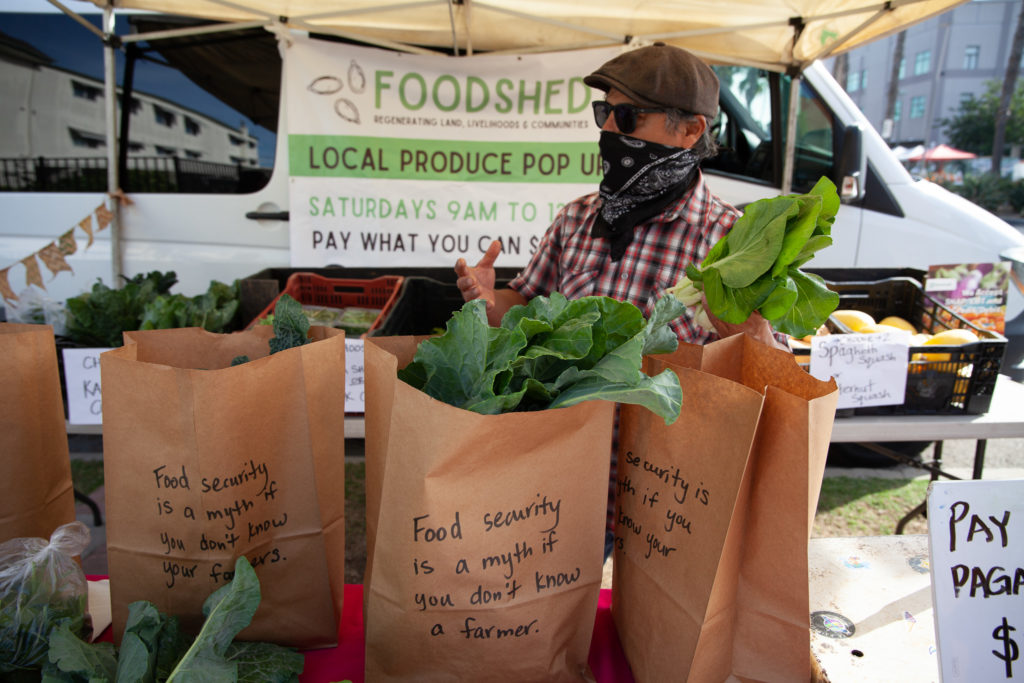 Becoming a subscriber to Foodshed’s Fresh 5 program—a weekly distribution of fresh, seasonal produce, grown by the small farmers who make up the Foodshed cooperative—means you’re in for two surprises with every delivery.

One is the produce itself: an ever-changing combination of veggies, fruits, and sprouts, with the option to add on pasture-raised eggs, local jams, and even whole chickens.

The other is the handwritten message printed on the brown paper bag that deliveries arrive in. It, too, changes week to week. Sometimes the message bears a well-known quote, sometimes an original quip or call to action. Some weeks, there’s no message at all. But the words, when they do appear, are always neatly inked in black Sharpie, unembellished and as plain as the truths they convey.

“Soil, not oil, holds the future of humanity. —Vandana Shiva”

“Pass the mic to the voiceless.”

“Food security is a myth if you don’t know a farmer.”

And on November 3, 2020—Election Day—a promise: ”No matter what happens today, we will keep planting seeds.”

Foodshed is not your typical CSA program. The 100% farmer-owned cooperative doesn’t shy away from the fact that food, like many other everyday things, is in fact political. On their website and in marketing materials, Foodshed is quick to point out in plain terms that problems with the current food system are matters of power, and solving them requires not just a sustainable or regenerative approach, but an equitable one.

“We started this work because we see the food system as a place where we need to take action,” says Ellee Igoe, one of the founding farmers of Foodshed.

In the modern food system, fewer than 15 cents per food dollar goes to farmers who grow the food, with the vast majority going to corporations that package it, market it, and transport it thousands of miles away to be sold off supermarket shelves.

Foodshed’s model of cooperative ownership and direct sales aims to create a food value chain that instead, gets good food to the people, while also distributing wealth more equitably: 80 cents of every food dollar goes to farmers, 5 cents goes toward regenerative agricultural research, and any remaining profit, up to 15 cents on the dollar, goes into the business and is paid to partner farmers through profit-sharing at the end of each year. “We call it the triple impact,” says Ellee. “Every food dollar that goes to a farmer is nourishing a family, and then re-circulates in the local economy.”

Besides its Fresh 5 deliveries, Foodshed also offers subsidized and pay-what-you-can options through pop-up markets. Initially launched in response to the pandemic, the first pop-up distributed over 1,500 bags (7,000 fresh produce items) in one summer of operations, moving $15,000 into farmers’ hands. One pop-up became four, which kicked off community partnerships, and now, has evolved into a mobile market that serves diverse residents in City Heights and Southeastern San Diego multiple times a week.

“We want equity for farmers—a fair price for their work and produce—but we also want equity for consumers,” says Kristin Kverland, known as “KK,” another Foodshed founding farmer. “In this hub model, without compromising the price that the farmer gets, people can have access to fresh produce regardless of how much money they have.”

Foodshed announced in May 2021 that its next undertaking would be to launch a physical space in City Heights: the Foodshed Farm Hub. When operational, it will provide cold storage and aggregation for urban farmers, increase residents’ ability to utilize CalFresh on farm-fresh food, and provide an organizing venue for community-led outreach and education efforts. The space has already been secured, and by the end of June, the team hopes to have crowdfunded enough to offset upgrades and permits needed to get the doors open.

Founded around the time of the pandemic, Foodshed has done incredibly quick work. They’ve built an end-to-end, farmer-owned food value chain; nurtured a majority-BIPOC producer cooperative; fulfilled weekly subscriptions; run a farmstand; brought consistent, accessible, fresh produce where it’s needed most; led the way with regenerative farming methods; and cultivated a relationship of mutual support with the Pauma Tribe, who leases the land that Solidarity Farm—Foodshed’s founding farm—grows on.

It’s a testament to the grit of the Foodshed team—Ellee, KK, Hernan Cavazos, Rica Catano, Bea Alvarez, and Adriana Barraza—and the cooperative’s growing list of producers and community partners. Their children, too, who are never far away and often lend a hand with farm and pop-up operations.

It’s also the result of many years of learning—trying, failing, and trying again, to grow food at the small farm level.

Reflecting on his pathway to farming, farmer Hernan, also a fisherman and an ex-professional basketball player in México, recalls growing up in the city of Mazatlán. “Since I was young, I felt a pull toward the land and a connection with feeding people. [The surrounding region of] Sinaloa is the agricultural heartland of Mexico, so farming was always all around me.” When industrial methods started taking hold in the farmlands of his home, it was obvious to Hernan that things were thrown out of balance.

“I watched big, agricultural industries move in and displace people and erode the culture,” he says. “With all their modern technologies, they were actually degrading the land. I wanted to find another path—to demonstrate that the way my abuela grew up in El Verde holds more promise for a viable and sustainable future.”

Many days, weeks, and even months still feel overwhelming for the small team that’s taken on transforming the food supply chain. The work is exhausting, unrelenting. But as more people—producers, supporters, and eaters alike—join the Foodshed community, perhaps the work is a little more rewarding, the burden a bit more evenly spread.

Farmer Bea says, “We believe that evolving the food system creates opportunities for people to collaborate and share our practices. This is our opportunity to focus on what we have in common, to build the resilience of our farms and our practices, which allows us as a society to face any challenges that may arise.”

Hernan agrees that the opportunities show themselves daily. “Farming has taught me to be patient and humble. There isn’t a day that goes by where I don’t need a large dose of each.” It’s a sentiment that is true for us all.

Ellee Igoe is co-founder of Solidarity Farm, and a founding farmer at Foodshed. Ellee has a rich career background including youth engagement, urban planning, and coordinating food and farming programs. A visionary in San Diego's food fystem, Ellee leads efforts around Carbon Farming, supporting small farmers, and cultivating the next generation of leaders.

Hernan Cavazos is co-founder of Solidarity Farm, and a founding farmer at Foodshed. As an immigrant to the US, father of three and grandson to elders that lived off their land, Hernan sees farming as one of the most radical vocations. His vision at Foodshed is to create solidarity amongst farmers and relationships between producers and consumers.