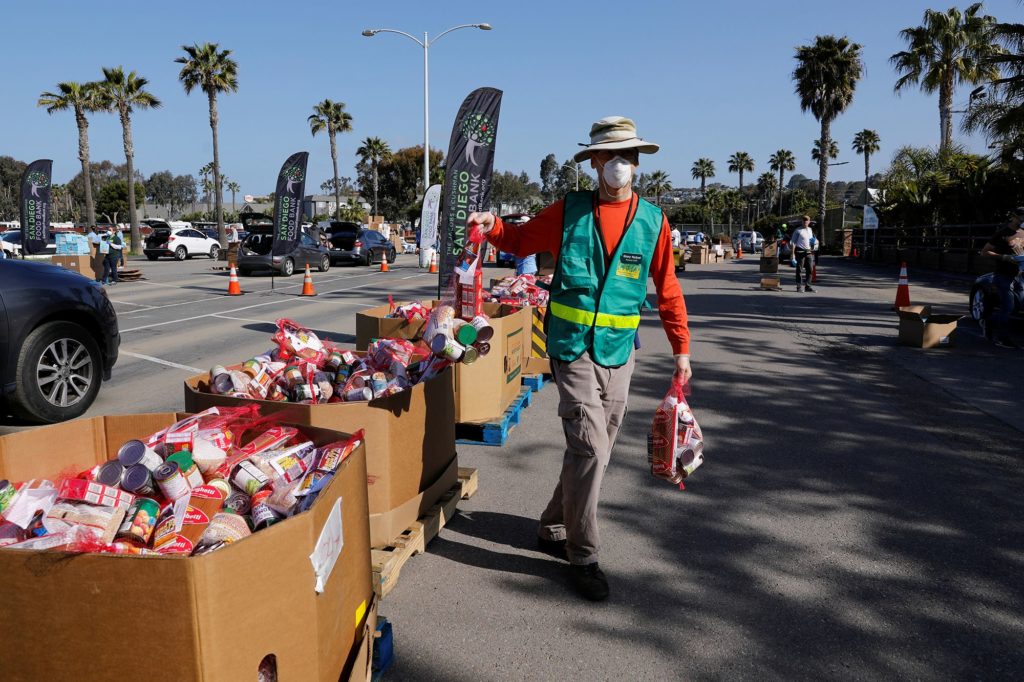 The San Diego Food Bank and Feeding San Diego are two organizations that have been on the front lines throughout COVID-19, securing and distributing more food than ever before.

According to the San Diego Food Bank, during the first couple months of COVID-19, people in need of food rose from an average of 350,000 per month, to an astonishing 600,000+ per month. This unplanned increase over just a short period of time put a lot of added pressure on the charitable feeding network throughout San Diego County. From mid-March to December 2020, the San Diego Food Bank distributed over 40 million meals to families through their network of 500 nonprofit partners in San Diego County. The organization also provided over $2 million dollars in agency capacity grants to help their partners withstand the increased demand on their food programs.

Within the same time span, Feeding San Diego has provided nearly 26 million meals, an average of 700,000 more meals each month, compared to the same time period a year earlier.

Needless to say, this unplanned increase over just a short period of time has put a lot of added pressure on the charitable feeding network throughout San Diego County.

“Our most vulnerable communities have been impacted the hardest including lower-income adults in the labor force, many of which are people of color,” said Vanessa Ruiz, Vice President of Operations at San Diego Food Bank. “The San Diego Food Bank has continued to work closely with partners across all sectors to ensure food-insecure families do not go without food.”

Alicia Saake, Chief Operations Officer of Feeding San Diego said, “It is impossible not to act when you see the numbers of neighbors facing hunger in San Diego alongside the incredible amounts of perfectly good food going to waste in our community.”

The two organizations address the issue by employing different strategies to ensure that nutritious meals are distributed to families and individuals in need.

The San Diego Food Bank’s average annual budget to buy food increased from $1 million a year to over $10 million since COVID-19 began. And during the same period, Feeding San Diego increased from purchasing an average of 24 truckloads of food per year to over 300 truckloads. “There continues to be an opportunity to rescue more food that would otherwise go to waste and instead get it to people facing hunger throughout San Diego County,” Saake said.

Both agencies estimate at least a 50 percent increased need for food assistance in San Diego County that will linger for years to come. Some industries are not expected to fully recover for two to three years, which will affect job prospects, economic stability, and lead to a very long recovery phase.

“The relief I see on people’s faces when they receive food continues to inspire me to do the work I’ve done for the past 17 years,” Ruiz said. The work, she explained, isn’t caused by the pandemic. The pandemic merely exacerbates a serious problem that’s been neglected for far too long.

Saake agreed, saying, “An equitable food system is one where everyone has access to enough healthy food to lead a productive and fulfilling life.”

Vanessa Ruiz is the Vice President of Operations at the Jacobs & Cushman San Diego Food Bank. Under her leadership, the Food Bank has expanded services, expanded nonprofit partners and increased food distribution by more than 255% –helping to serve 350,000 San Diegans monthly. It is through her work at the Food Bank that Vanessa become invested in the local food system.

Alicia Saake is the COO of Feeding San Diego, where she started as a volunteer in 2010. Alicia utilizes her decades of experience in logistics and operations to divert good food from reaching the landfill, and streamline the way food moves around the county and into the hands of San Diegans.