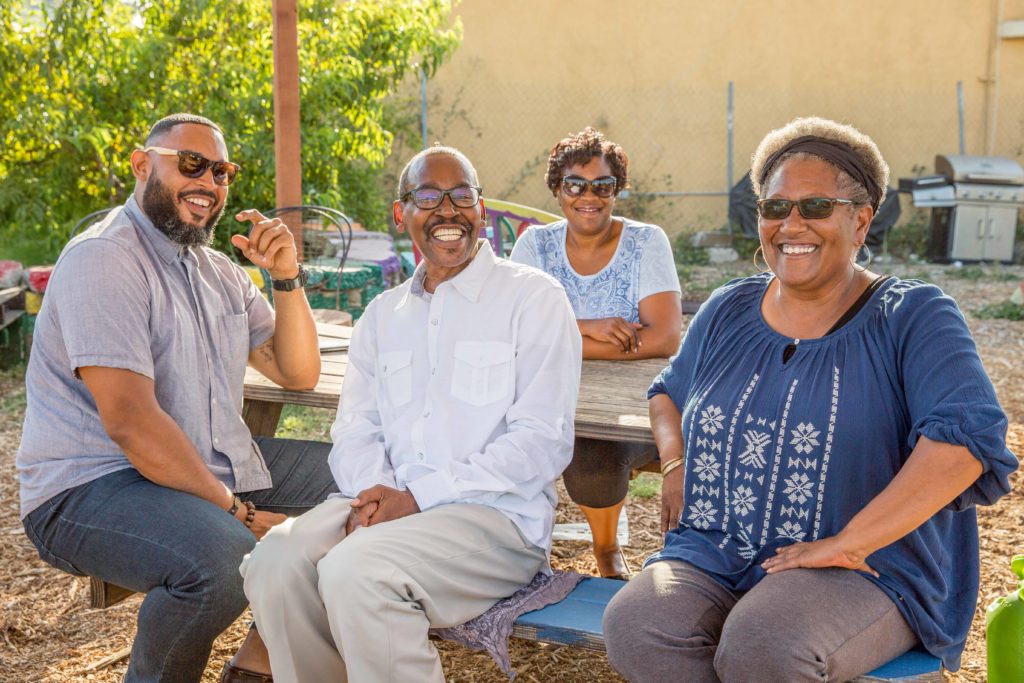 Dian Moss, Managing Director of Project New Village in Southeastern San Diego, was not always interested in food justice—in fact, her discovery of the movement was happenstance. “In 2006, I happened to sit at a workshop with a woman named Ellee Igoe, who was then the manager for the International Rescue Committee’s farm and now runs Solidarity Farm. She kept talking about this issue of food justice, of which I had never heard of before. I heard of a lot of justice movements, but not food. I come from south central Los Angeles, Compton, and I figured you got what you got.” Looking around the room, Dian did not see any of her neighbors, but she did see an opportunity. She explains, “In Southeastern San Diego, we only had a few retail stores, including a Food 4 Less. There were no farmers’ markets and no community gardens that I knew of.” The conditions she saw were the result of a long history of racially-driven policies in the neighborhood such as redlining, discriminatory ordinances, and poor planning decisions. Inspired, Dian brought the idea of a community garden to her neighbors and together they broke ground on Mt. Hope Community Garden in 2011.

The community garden was just the beginning for Dian and Project New Village. The garden planted the seed for a host of food-centered projects in Southeastern San Diego, including local farmers’ markets and a community pantry in response to COVID-19. The organization’s most ambitious project is the Good Food District, a multi-story, mixed-use development planned on the site of the community garden that centers urban agriculture in promoting social wellness, community cohesion, and overcoming the legacies of systemic and structural racism in the neighborhood. With Dian’s leadership and the help of The Conservation Fund, the nonprofit has already been successful in purchasing the land for the project—no easy feat for a small nonprofit focused on addressing systemic racism. Dian’s work in Southeastern San Diego is a testament to the strides that are possible when Black, Indigenous, and People of Color (BIPOC) take on leadership roles in their communities.

Blaire O’Neal, PhD, is a a postdoctoral research fellow with the National Institute of Food and Agriculture in the United States Department of Agriculture and Adjunct Professor at San Diego State University. Her areas of expertise include urban geography, political ecology and food studies. The main question that drives her research is: “How can urban food systems integrate sustainability and social justice?”