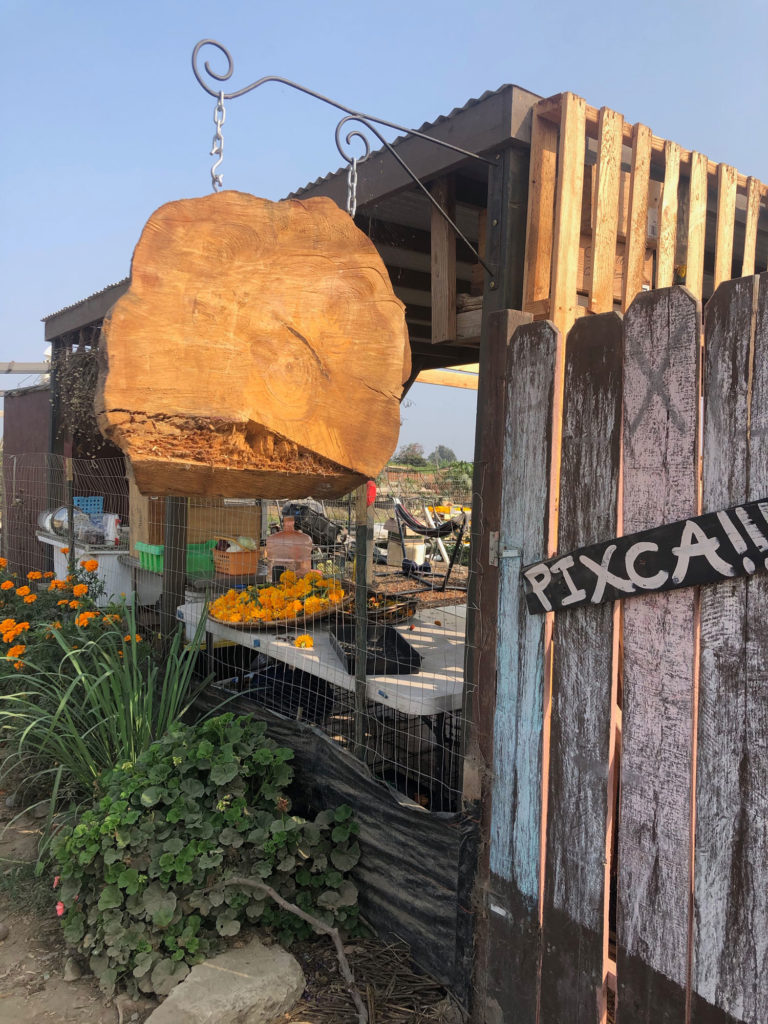 All of this bounty is grown on a half-acre plot in the South Bay, by Pixca’s four farmers, who also co-own the farm.

While the flowers have become a Pixca signature, they actually started out as an urgent survival tactic. “On December 6, 2019, it didn’t flood anywhere else, but it flooded where we were,” Leonard Vargas, one of Pixca’s founding farmers says with a rueful laugh. “We had just started to gain traction with our vegetable CSA, and we were suddenly forced to destroy everything and start over.”

“However,” he continues, “the flood, along with the pandemic a few months later, turned out to bring a silver lining with every storm.”

After losing their vegetable crop, Leonard and his partners regrouped and decided to add flowers to the mix. Flowers can be grown again sooner, since there is less need to worry about contamination from the flood, as you would for edible products. “We met the Mother’s Day demand nicely, especially when COVID-19 shut down larger cut flower operations,” Leonard says. “That gave us a big boost in terms of revenue—and they are something we can fall back on in case we have another flood.”

Leonard knows his way around growing both food and flowers. He’s been growing both types of products for thirty years, and is a third-generation farmer who hails from a family that has been farming in Los Angeles and San Diego Counties since the 1940s.

When he reflects on the change he’s seen in agriculture over the last quarter-century, Leonard invokes a grim pun. “It certainly has eroded, in my opinion. When I was growing up in the late 1970s and 80s, there were a lot of strawberry growers in North County who are no longer there. All that coastal plain we have in LA and San Diego Counties used to be farmland, and there’s no climate like coastal plain for growing. Now it’s just high-priced housing. Globalization and imports have really eroded agriculture in this area.”

Even after seeing agriculture in decline for decades, however, Leonard shows no signs of discouragement. In his practical, no-fuss way, he describes the process of starting Pixca Farm—a thriving, colorful patch in the South Bay that has withstood flood, pandemic, and a challenging economy, and continues to nourish residents while supporting its worker-owners with fair revenue and collective agency. “Well, we did it pretty bootstrapped,” he says, simply. “Forming the entity on our own, we often felt as if we were groping around in the dark.”

After crossing that hurdle, there were further difficulties: growing on limited space, sourcing dependable compost, having limited supply and equipment retailers in Central and South San Diego County, which forces hours-long trips up north to pick up basic items.

Leonard shares that, all the same, he remains confident in Pixca’s success, and our ability to shift the food system to better support growers, workers, and aspiring farmers.

“I think there’s a real opportunity in getting people to focus on supporting local, instead of having food imported from elsewhere. People do want to walk down the block and buy from their local farmstand.” On the future of farming, he says, “There are a bunch of young people who want to do this as a living, but they can’t make it through the barriers. We need to make the pathway for them.”

Just as he looked at a flooded field and saw flowers, Leonard looks at San Diego County’s shrinking traditional agricultural sector and sees an opportunity for change. Pixca, with its collective ownership model and direct sales, will likely double in size soon—with hopes to supply the likes of Jimbo’s and People’s. Leonard also has his eye on a distant—but not too distant—vision: splitting a much larger piece of land in the South Bay into 5-acre plots, to nurture future farmers and support small operations in our region. “That could grow a lot of food!” he says.

After thirty years in the business, Leonard says farming still holds the same magic it always has for him. “Putting a seed in the ground is a way of looking into the future. People come by and say, ‘Wow!’ I like inspiring them to realize that they can do this, it’s not impossible.”

Leonard Vargas is a founding farmer and co-owner at Pixca farm, and the gardens and facilities manager at Olivewood Gardens and Learning Center. Leonard is a third-generation farmer, bringing more than two decades of professional growing experience to San Diego County. He is happiest when his hands are in the soil and hopes to inspire and empower the community to grow.