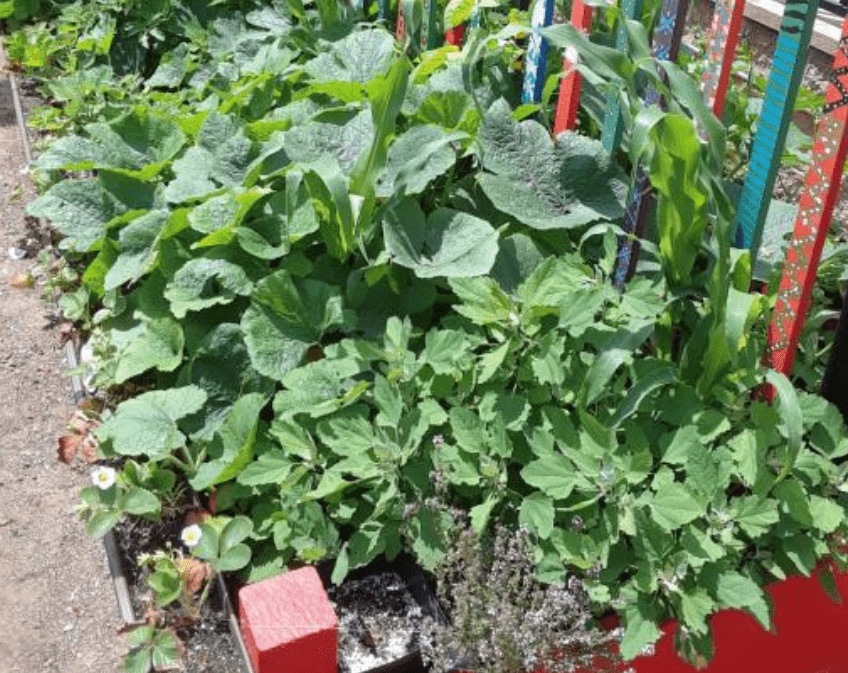 Anna Rameshwar grew up in Fallbrook surrounded by plants and gardening. Some of her earliest memories involve patting down soil and spending time in nurseries. When she grew older, Anna helped out with the family landscaping business, installing landscapes, digging trenches for irrigation systems and maintaining gardens all over the Fallbrook community. She began her first garden in fourth grade with sunflower seeds, and by the time she reached high school, had cultivated a vegetable garden for her mother. While her passion for nurturing all kinds of plants continued to grow, her perspective on certain practices began to shift. “I became skeptical of patterns I saw in landscaping,” she says. “I wondered why we kept planting these huge plants that were not drought resistant and always needed to be trimmed. That’s when I became interested in Native planting.”

Anna took a job at a local nursery and began learning to propagate plants and succulents. At the same time, she also studied childhood development, sign language, and the Indigenous Pala language, eventually becoming a language teacher and musician, teaching children songs in their native tongue. Her two passions finally came together at the Little Feathers preschool.

“A community garden should be at the center of things, so I sought permission to clear out weeds in the small cinder block garden at Pala Youth Center right in front, where everyone can see them,” she says. “The existing plants were just landscape plants and weeds, which were removed to grow vegetables instead.” The birds of paradise with corn,  tomatoes, and chiles yielding an enormous first harvest that went home with students and was distributed at the Youth Center. Thanks to her connections at local farms, places like Bonnie Plants also donated watermelon and soil for the garden, and for community members to plant at home.

“We need to teach our younger generation to be able to identify native plants on the road, and to know how to grow food native to this area,” says Anna. “We need to create programs with youth where they get dirty in the garden. We should light that fire for people of all ages, but especially kids. I try to engage them as much as possible.”

The little garden caught the attention of the neighboring Pechanga Tribe, who also wanted a community garden and enlisted Anna’s help. She paused before agreeing. “When you are the main person caring for a garden before it is adopted and cared for by the whole community, significant work and upkeep falls on you,” Anna says. “It requires year-round attention. I encouraged Pechanga to not start the garden unless they could commit to the upkeep.”

Pechanga followed through. They held official meetings about how to get their garden funded and make it sustainable. To this day Pechanga has a community garden.

Just as Anna sees involving youth as the key to preserving native plant knowledge, she sees seed saving as critical for preserving biodiversity and resilience. “I’ve always liked collecting and starting seeds,” she says. “It’s important to collect seeds so you always have something to plant. When COVID-19 first happened, seeds suddenly disappeared everywhere. In crisis, people realized that a garden can feed you and heal you.”

She adds that growing from seeds is better than growing from cuttings. “We have seen diseases—with oleanders, for example—that I think are a result of too much production by cuttings instead of being started by seeds.” Seed saving needs to be strategic though. “We can’t just collect, we need to plant and restart. We need to keep producing these plants from seed to make them stronger and better adapted to the local environment.”

Anna maintains that in modern times, plants remain the most dependable thing we can lean on. “Pushing buttons is not going to keep us alive. Taking care of the Earth is going to keep us alive. What I hope to see is more front yard gardens, instead of grass and lawn. More programs for the youth. And more people looking to nature for their answers. The beauty, complexity, and design behind each plant is all we need to observe to realize that this is where all our answers lie.”

Anna Rameshwar is a language instructor at The Cupa Cultural Center, a community center on the Pala Indian Reservation dedicated to preserving, perpetuating and enhancing traditional cultural practices. Anna grew up in Fallbrook caring for plants, later working at various nurseries and growing her knowledge of native planting. She now applies these experiences to the Pala Community Garden, bringing community members together to restore the land.