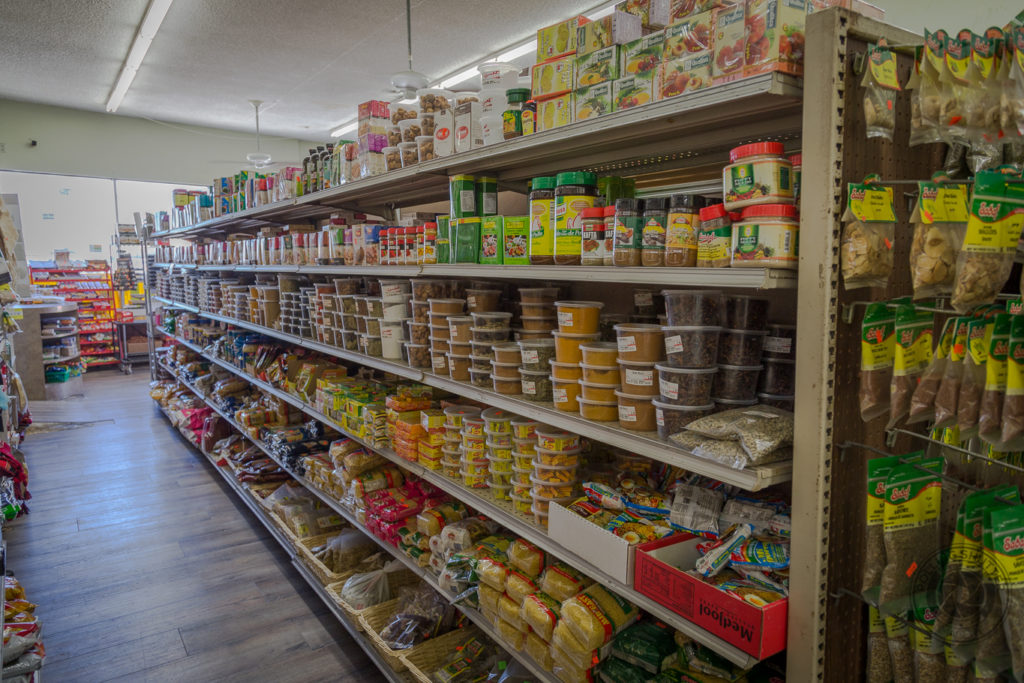 Stepping into City Heights’ Mid-East Market is a sensory experience, and for many first- and second-generation Americans, it conjures up memories of home—childhood, comfort, holiday traditions, multi-generational family gatherings. The market is small, its aisles densely but neatly packed with rows of spices, desserts, and specialty products that hail from all over the world: Africa, the Middle East, India, parts of Europe. Fresh produce is around the corner, and against the back wall is a counter for ordering the store’s signature offering: Halal lamb, goat, and chicken, all locally raised without hormones or antibiotics, grass-fed, and humanely slaughtered. On weekend mornings, a line forms, made up of both City Heights residents and those who have come from farther away—each person calling out their regular orders and swapping conversations with owner Al Ilaian. “This is a neighborhood gem,” one customer says.

Where Mid-East Market is situated is significant: City Heights has been called the most ethnically diverse neighborhood in the nation, with residents of Vietnamese, Somali, Cambodian, Laotian, Hispanic/Latinx, and Middle Eastern descent, to name a few—and dozens of languages spoken across its small footprint. Murals displaying diverse faces and community gardens where Asian and African vegetables are grown dot the streets. Although many differences exist among City Heights’ diverse ethnic groups, the feeling of solidarity is palpable: The shared experience among immigrants and refugees is stronger than their differences.

In 1980, Palestinian immigrants Hani and Khawla Ilaian opened the Mid-East Market on El Cajon Boulevard and 46th Street to provide the growing Middle Eastern population with Halal meat. As they became more familiar with their diverse community, they expanded their offerings to serve local needs with specialty products from all over the world, as well as fresh produce. The spice aisle and specialty ingredients now reflect the global tastes of their neighbors. “We cater to many African, Afghani, Indian, Russian, Iranian, and Iraqi customers,” explains Hani and Khawla’s son, Al, who has now taken the reins at the store.

In addition to whole goat legs and shoulders, lamb shanks, chicken, and beef, the shop also offers healthy prepared foods, including Arabian specialities like smoked eggplant baba ganoush, marinated olives, and other items like “Mediterranean salsa” that were added to suit the local community’s taste. There is a section of whole, dried spices, including items like Ethiopian barbari and Ethiopian butter spice, samke hara (hot fish) spices, sumac, cloves, whole cardamom, fenugreek, and much more, all at varying price points. Nezar, Al’s younger brother, assures customers that the market has a healthy turnover, which means these dried spices are fresh.

City Heights has long been called a “food desert,” with official discussion of solving food insecurity issues here revolving around adding more big box grocery stores—but when you take the time to wander the aisles of a small, family-owned store like Mid-East Market, try the products, and wait in line with fellow customers, this characterization of the neighborhood and proposed solution seem blunt at best. Perhaps the food landscape we dream of for places like City Heights should not look like what has worked elsewhere, but center the experiences of those who live and shop here daily. Mid-East Market may not be an oasis in a desert, so much as it is a gem in a resilient community—and one of many examples of neighborhood businesses that can thrive if we support them.

Al Ilaian is the owner and operator of Mideast Market in City Heights, a family business that has been catering to its diverse community for over 40 years. Passed down from his Father, Al continues the markets legacy of serving the community fresh halal meats, speciality deli items, and many other traditional foods from around the world.