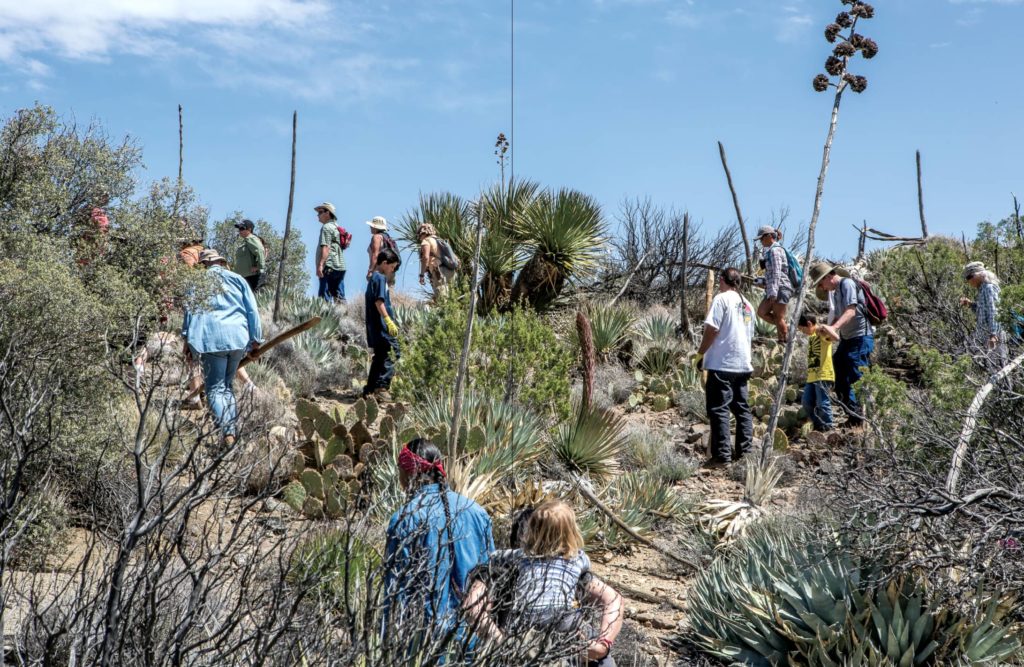 “Mesquite, acorn, and nopales—three foods that are native to this region, sustainable, and good for you,” says Abe Sanchez, a member of the Purepecha Tribe who works with scholars and culinary experts to preserve and pass on traditional foodways. “These sustainable foods are widely available, yet underused. Our cultures have lost their connection to the food that is native to this land, and to their history, but now we are trying to revitalize it. My goal is to advocate for the decolonization of diets by promoting Native Californian and Southwestern plant-based foods.”

He and other members of the Chia Cafe Collective are dedicated to restoring the place of indigenous ingredients in the Native diet through food workshops and classes; gathering, processing, and distributing plants to elders and others; transplanting native plants in areas slated for development, and cultivating them in gardens in order to share seeds and cuttings.

“I would see people in our workshops hand-writing down the recipes, and saying ‘I want that recipe!’ so we decided it was important to write a cookbook,” says Deborah Small, one of the ten authors of Cooking the Native Way: Chia Cafe Collective. “We are all educators, so it wasn’t about making a profit, it was about sharing information and preserving these Native foods and Native medicines.”

“Sustainable foods and Native foods have been a hot topic over the last few years, and that opened doors for us to present what we are doing,” says Abe, who added that their work is about more than just the recipes, but also about relationships with the natural environment. “I’ve been most excited about Native American ingredients, like the mesquite bean. It’s a superfood that grows in the desert and is only watered by monsoons. It’s a super nutritious food that has sustained indigenous people for thousands of years, but we aren’t utilizing it,” he says. “The question becomes, how do we get people to like these foods, to actually eat them?”

At workshops, the Collective members present Indigenous foods in modern applications. While chia seeds were traditionally roasted and ground into gruel, they now can be added to cornbread mix to increase the nutritional value. Acorns are another sustainable, local food source that people don’t know what to do with. The Collective is teaching how to grind acorns into flour that can be used in place of masa. “The tortillas have a little hint of acorn flavor,” says Abe. “Some people ask why we aren’t just teaching traditional cooking methods, but my experience is that ‘decolonizing’ our diet is pretty tough to do. We first need to source the ingredients, and then we have to help people develop a palate for them.”

The Collective is taking an active role in providing community access to gardens and teaching people how to gather legally and safely. “All members of Chia Cafe Collective have gardens so we can educate ourselves, grow the plants ourselves, and then offer in-depth learning,” said Deborah. “I have a 50-foot prickly pear fence which is open for anyone to gather, my neighbors and everyone in the area.”

“You really don’t even have to be a savvy gardener to grow nopales,” Abe said.

“But you have to eat them to grow them, because they grow so fast!” Deborah said.

“We are trying to solve the challenge of accessing some of these Native foods,” said Abe. “There are a lot of ornamental plants in the city and acorns in the park are just as good as acorns in the wild, but if you are going to be gathering, you need permits. We teach people how to get permission.”

Decolonizing an indigenous diet can sometimes require a contemporary approach. “Americans are finicky, privileged eaters. So the question is, how do we bring them back?” said Abe. “It’s very interesting to see the ways we can encourage a positive reintroduction to local foods. A big part of reviving the availability of native foods is getting people to like them.”

“I really wanted a healthy alternative for a mocha cappuccino from Starbucks, so, one of the recipes I created for the cookbook used mesquite flour, chia, and some cacao blended with ice,” said Deborah. “It tasted delicious and satisfied my desire for a milkshake. The key for me was not only to indigenize things we already enjoy, but also to make them healthier.”

The Collective hopes to continue to grow their efforts, scaling up access and availability of Indigenous ingredients and popularizing them. “My vision would be to coordinate with people who are farmers and know what they are doing in mass quantities so we can offer pick up CSAs featuring traditional foods,” said Deborah. “Food as medicine is a Native perspective and the medicinal uses of so many local plants are hugely significant. So I’d also like to see our diets re-indigenizing using nettle and chia and mesquite powder.”

“I want to ignite the idea or energy within the Native community, so we are mentoring people on relearning to gather and to harvest. Mesquite is comparable to almonds, but it grows in the desert. I’ve been encouraging youth to sell roasted mesquite flour and acorn flour, like they do in Arizona,” said Abe. “We are reteaching in hopes that they take it and make it their own so they can go on to educate others.”

Abe Sanchez is a founding member of the Chia Café Collective, co-author of Cooking the Native Way, and a community educator. Abe's work focuses on the revitalization of California's indigenous food ways, the community to decolonize their diets by gathering, cultivating, and coooking native plants. Abe hopes by bringing traditional foods back to the table, we can combat diet-related diseases in Native communities.

Deborah Small is a Professor of Visual Art at CSU San Marcos, and founding member of the Chia Café Collective. Deborah's teachings include how to protect native lands, document cultural practices, and learn native plants so essential to indigenous cultures. Deborah also educates communities on native planting, cooking, and practices through her work at the Chia Café Collective and her Ethnobatony blog.