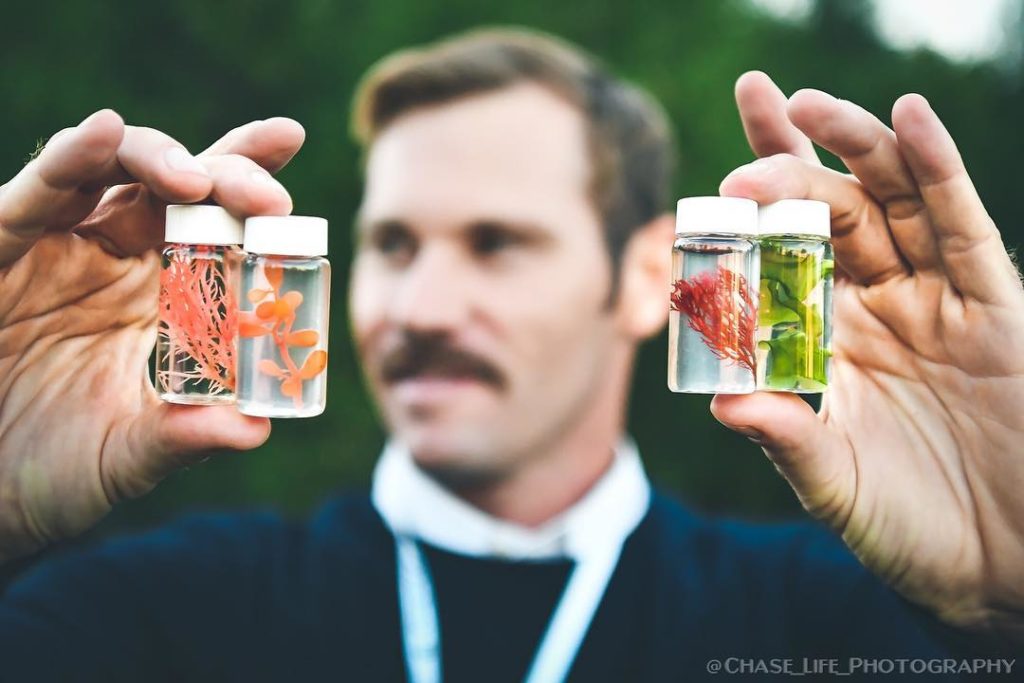 Despite having over twelve thousand miles of coastline, 99% of all seaweed consumed in the United States is imported. For Brant Chlebowski, founder of California Seaweed Company, this travesty has become an opportunity.  “Health-conscious consumers are seeking out seaweed as a vitamin-rich, protein-packed, plant-based snack and ingredient, and chefs love seaweed for its crisp flavor and superfood properties,” says Brant. “We want to bring locally grown, sustainable, native seaweeds to the food and beverage market from local, West Coast farmers.”

Launching a new commercial seaweed farm from scratch would have been expensive and time consuming, so Brant came up with another solution. “We started with a public-private approach, leveraging the great marine science research being conducted at Scripps Institution of Oceanography to experimentally cultivate local species, which we then licensed to test in markets in San Diego. Our goal is for local consumers to have access to the best seaweed that is sustainability produced.”

Innovative problem solving is fundamental at California Seaweed Company, where over the next decade the team aims to create packaging and processing technology that can be licensed by regional seaweed farmers to capture more value for their crops. “Now the biggest challenge is identifying the next technological development that can extend the safe transport time of seaweed to allow for longer use,” Brant explained, adding that they have already launched an easy-to-use portal for local farmers to sell their ever-growing lineup of native seaweed varieties to a wider market. “As a start-up, we face the constant task of supporting our mission while supporting the people we work with—producers, chefs, and the public. San Diego is an exciting place with great food culture, a socially and environmentally aware public and world-class chefs.”

Beyond the nutritional value of seaweed, its production is sustainable and low impact. Some studies have even shown that seaweed farms can reduce ocean acidification and neutralize carbon emissions. The sheer potential of seaweed as a food source and a carbon negative form of aquaculture is what motivates Brant to continue to develop technologies he hopes will one day support seaweed farming efforts around the country. “It is a pleasure to learn and connect with local food producers through my work,” said Brant. “The health of the global ocean, the prosperity of my local community, and the desire to create a more sustainable future for the following generation is what drives me forward.”

Brant Chlebowski is the founder and President of California Seaweed Company. With degrees from Scripps Institution of Oceanography's MAS MBC Program, UC San Diego, and a MicroMBA from the Rady School of Management, Brant is considered an expert in ocean conservation communication. Brant's mission at California Seaweed Company is to improve sustainable aquaculture of culinary seaweeds.